Coming Soon to Theaters near You! Saxon Advanced Math 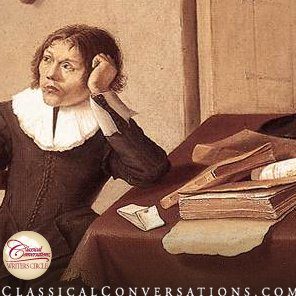 Do you ever wish someone would turn your required reading into a big-budget summer blockbuster? This July Fourth weekend, feeling slightly traitorous to your classical roots, you could sit in an air-conditioned theater, feed your children popcorn for dinner, and watch A Patriot’s History of the United States in a manageable two-hour block.

Chapter four would last approximately three minutes. It would explain the entirety of the Constitutional Convention through witty repartee between Thomas Jefferson (Matt Damon) and Alexander Hamilton (Ben Affleck) over small government. The scene would round out with a biting, humorous speech from Benjamin Franklin (Jack Nicholson) rejecting the need for presidents to have a salary. A soaring score by Danny Elfman would play in the background during the final scene of the film.

Our Mother Tongue would be a heartwarming production co-written by Nicholas Sparks and Alex Kendrick, and starring Rachel McAdams and Kirk Cameron. The Smiths are just your average American family: Dad (a newspaper editor who works a bit too hard), Mom (a high school English teacher who worries about the future of her profession), and their children (tech-savvy teenagers who could not care less about the written word). Then, a devastating accident brought on by texting while driving threatens to destroy the family. Enter an inspiring therapist (Sean Connery), who uses sentence diagramming to restore the son’s fine motor and cognitive skills. As the Smith family works through classes of words and kinds of sentences, they rediscover their love for one other as well as the power of the English language.

Next on the list of new releases is Saxon Advanced Math. Dan Brown would initially sign on to write the screenplay, but after a few meetings with producers, he would storm away in a numbers-induced rage. The final film would be directed by Ron Howard and Neil Gaiman. It would star Keanu Reeves as a man lost in a confusing underworld maze of proportional segments, polar coordinates, and complex fractions. To escape, our hero must enact a multi-step proof of the Pythagorean Theorem, guided only by the voice of his father’s ghost (special guest Art Reed).

Finally, Henle Latin: First Year would be a Disney-Pixar tale about five best friends named First Declension, Second Declension, Third Declension, Fourth Declension, and Fifth Declension, who decline college scholarships in order to seek their identity and purpose in life. Along the way, they join forces with a set of dramatic and funny adjectives voiced by Johnny Depp, Will Smith, and Ellen DeGeneres. In the end, the nouns are reunited with their long-lost cousins, four verb conjugations, setting us up for a rollicking sequel (Henle Latin: Second Year) about the relationships that develop and the sentences they form. Hey—if Pixar can make a car, a rat, a robot, a clownfish, and a pair of binoculars devastatingly cute, surely they can do something for a Latin noun.

Of course, after these daydreams spin to a halt, I pause and reflect on how few details I actually remember from Star Trek: Into Darkness, and how long it took for me to make any sense of Introductory Logic in comparison with this two-hour encounter. Speed and entertainment is one thing; real, lasting learning is another. As much as I would like an easy, two-hour shortcut to learning, I know that such fancies are best left to the imagination.

With a wistful smile, I return to my firmly held conviction that the book is usually better than the movie. After all, handsome though Viggo Mortenson and David Wenham may be, I prefer my own mental pictures of Aragorn and Faramir from Tolkien’s The Lord of the Rings. Perhaps someday, I will feel the same way about my own hard-earned understanding of the quadratic formula.

Do you ever fight the urge to make learning as easy as watching a summer popcorn flick? What “required reading” would you most like to see in movie form?