Confessions of a Middle School Cheater 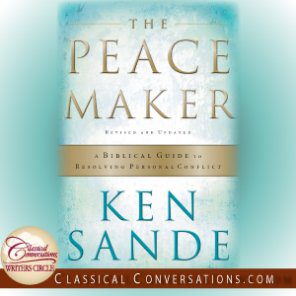 Confessions of a Middle School Cheater
by Cara McLauchlan

“He who conceals his sin, does not prosper, but whoever confesses and renounces them finds mercy.” – The Peacemaker, page 117

Remember the expression “cheaters never win.” Well, sometimes they do. I am ashamed to say I was a cheater in middle school. It all began when our teacher announced a surprise “Current Events” test as part of our history class. We had never studied current events in our history class. We had studied, shockingly, history. Everyone knew this was one of the random tests sent by the state to see what middle schoolers knew about current events. It was a check box by the school’s administration.

This would have been the mid-1980s and I remember how hard the questions were. These were questions like, “What were the Hindu-Muslim riots about in Assam, India?” “Name the current political leader of Saudi Arabia.” Or, “In what country was the US Embassy bombed in 1983?” And so it went.

If I had been a Classical Conversations student at the time, I would have had a chance of scoring well with all the geography and current events discussions. Unfortunately, I was a public school student. I asked the teacher a question to clarify what a word meant and there sitting in plain view on his desk was the entire answer key. Suddenly, I had many questions for the teacher and before long I had copied the entire answer key while my teacher elaborated on meanings of words and geopolitical definitions. Then I turned in my test and forgot about it.

Weeks passed and I did not feel one iota of remorse about my cheating. It was a dumb test. No one cared about it. It was not even for my report card. Soon it was time for our year-end school assembly. Our school hosted large assemblies about two times a year, usually for an enrichment experience, a performer, or a special guest. Today we were celebrating academic achievers.

Before I knew what was happening, I was being called before the whole school for my almost perfect score on, you guessed it, the current events test. I wanted to crawl into a hole. They also gave recognition to the person everyone knew was the smartest student in our grade, Matt Boerma—who, surprisingly, came in second. His measly certificate was nothing near the celebration, medal, cheers, and over-the-top recognition they gave me. I was going to be interviewed and photographed by the town newspaper. I was mortified.

I wish I had a good story to tell you such as, I immediately grabbed the microphone and said, “I don’t deserve this. I’m a cheater!” But I don’t. I miserably took the recognition and pretended I really had scored that well.

In some ways, that was so much worse. I think God had a sense of humor that day. I can imagine Him rubbing His hands together and saying, “She wants to cheat? Oooh, this is going to be good!” Not that I think our God is vindictive, but the way I was called out taught me a lesson that stayed with me for life. The fact that I am telling you about it more than thirty years later confirms it was a lesson well learned.

In Ken Sande’s book, The Peacemaker, he addresses the topic of confession as a means to heal conflict in our lives. I love the way he describes repentance as more than just a feeling, but truly “coming to our senses.”

“Repentance does not mean we simply feel sad and uncomfortable. Nor does it involve a mere apology. To repent literally means to change the way we think. Thus, repentance is sometimes described as ‘coming to our senses. …It involves waking up to the fact that we have been deceiving ourselves that our ideas, attitudes, values, or goals have been wrong” (page 118).

Our heavenly Father knew we would make mistakes, that we would do wrong, and hurt each other. He designed a perfect healer, Jesus Christ, through whom we can live in freedom, not burdened or cast off when we mess up.

Sande, in his nurturing way, lays out the “Seven A’s of Confession” in chapter six. His wise tone gives specific instructions on how to confess in a godly way that demonstrates the love we have experienced from our Savior. I especially enjoyed having a written process outlined for me in the book. Having grown up in a home that did not truly model Christ-like behavior or forgiveness, it is a lovely thing to see what it might look like when confession and repentance are done well.

I especially love the seventh “A of Confession,” “Ask for Forgiveness (and Allow Time).” For me, once I have gone through the act of confessing, I want everything to be right again and to get on with life. However, sometimes that is not the case. Some people need time to heal. If you rush the process of forgiveness it becomes more about you, not about caring for them.

“When you go to confess a wrong, remember that you are there to serve the other person and not to gain comfort for yourself. Focus on showing God’s loving work in your life and on ministering to the person you have harmed” (page 134).

After the middle school incident, I never cheated again. When the assembly was over, I went to Matt Boerma and told him I had cheated and that he deserved the award. I remember pressing the beautiful medal into his hands, sadly, and saying it was his. He did not really know what to say or think. I knew my token act was not really enough, but in my heart, I knew the act of confessing to the person I hurt the most was one step towards goodness.

Now looking back, I understand that my heavenly Father had stirred up in me a knowing that confession brings wholeness, that admitting my wrongs made space for more of God’s goodness to take over. By surrendering pride, you demonstrate a caring for someone more than yourself and you gain a loving freedom that is so much better, even better than the feelings that receiving any medal or award could ever bring.