Consequences of Ideas: The What, the Why, and the How 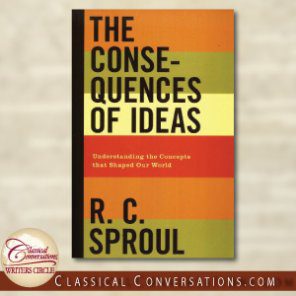 A long time ago, on a peninsula far, far away, a handful of men began asking questions. These question-askers—these lovers of wisdom—realized that the simplest questions about common, everyday things and experiences could open doors to questions about all of reality. They began asking questions of their neighbors; neighbors asked neighbors, and over time, students flocked to the question-askers. Since these “wisdom-lovers” set up their schools in Greece, and since most folks there spoke Greek, they became known as “philosophers.” In Classical Conversations, we are blessed with the opportunity to enter into conversation with these foundational thinkers of our Western culture.

The Classical Conversations study of R. C. Sproul’s The Consequences of Ideas focuses on the history of Western philosophy through the characters that contributed to its progression. The Challenge III class follows the progression of systematic, philosophical thought, which begins around 600 BC, all the way into the present age. Dr. Sproul has spent his career endeavoring to shine light on categories that are often hard to grasp for those who have not focused their lives on academic pursuits and advanced degrees. This is not to say that studying philosophy is easy, even with Dr. Sproul leading the charge, but it is to say that there are probably not many books of this type out there that are easier to understand than his. In less than two hundred pages, Dr. Sproul moves through the major figures of Western philosophy describing and analyzing several of their personal contributions along the way.

There is almost no end to the number of ways fallen humanity can misunderstand reality, convolute the truth, or contrive ways to glorify the creature rather than the Creator. Although there are many, many habits and beliefs that we have inherited uncritically from our family and cultural heritages, many of our beliefs have been formed through a concerted effort to form a more thorough understanding of the world around us, in us, and above us.

The formal study of philosophy provides students with categories so that they can parse, or perhaps diagram, the world of humanity’s varied ideas, beliefs, and actions. The students’ acquaintance with the categories and history of Western philosophy provides them with a real-time example of the Old Testament principle that “there is nothing new under the sun.” Mankind continues to find new ways to nuance the old questions that have frequently led to grave error and, sometimes, heresy. Philosophy students also acquire the tools to assess their own ideas and consider the implications which could flow from embracing this or that particular ideology.

This brief encounter with the subtleties of philosophical thought can also lend itself to young people more fully loving their neighbor as they love themselves. The differences between the schools of thought they encounter are often highly nuanced, and the writers can sound highly-educated, and therefore, quite convincing. It becomes clear that each person’s own worldview and resulting actions are likely to be highly nuanced as well, stemming from their culture, education, and family influences. If students learn to consider the subtleties between people more carefully, they can avoid rushing to the judgment of someone’s worldview before knowing them more fully and personally. A heightened awareness of the big ideas of Western philosophy can enable its students to think more carefully about their interactions with everyone they encounter.

In the fall semester, the study of Challenge III philosophy begins with the students reading R. C. Sproul’s The Consequences of Ideas at home. While reading, students make an outline of the material covered, which they then bring to class to help jog their memory about what they read during the week. The philosophy discussion in Challenge III is a student-led conversation, so students not only learn the content of the text, but also learn leadership and presentation skills during the seminar discussions. Each week a student leads by asking questions of the other students in the class. These questions kindle a fire of conversation by providing spark to the dry tinder of wonder and discovery in their classmates.

Over the course of the spring semester, students study Traditional Logic II by Martin Cothran as well as Plato’s Socratic dialogue, The Meno. The study of logic is accomplished at home, and then students bring questions to class for discussion. The bulk of the time in seminar, however, is spent reading Plato’s The Meno aloud together as a class. Over the course of the semester, we will read The Meno twice through. The first time, the discussion is developed around the questions, “What is virtue? Can it be taught?” During the course of the second reading, we discuss the art of Socratic discussion itself: the pursuit of truth through dialogue between two thoughtful question-askers. So the purpose of the first reading is to discuss the content of the dialogue, while the second reading is to discuss the form of Socratic dialogue.

Philosophy is often viewed as a complicated and unnecessary diversion into abstract realms that only a few academics have either the desire or the time to pursue. The rest of us, it is commonly held, are concerned only with the practical, bread-and-butter stuff of the real world. Many say we need more STEM classes, while no one is vying for more philosophy courses. Yet the classical tradition recognizes the importance of philosophical study to the liberal arts.

The categories learned and the conversations held throughout the study of formal Philosophy enable a student to consider a matter carefully, to contemplate humanity, and to cultivate a freedom of mind that cannot be taken away. Inasmuch as we are called by our Maker to become “lovers of wisdom,” He has called us to become “philosophers.”