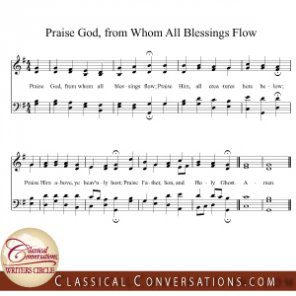 I have just finished three days of speaking at one of our Parent Practicums in Georgia, and once again, my own heart has come away enriched and grappling with deeper truth and greater insight. We spent the past three days analyzing and sharing with one another about the arts of the trivium—grammar, dialectic, and rhetoric—and learning how those tools can lead us in the acquisition of knowledge, understanding, and wisdom across all the strands and subjects of academia as well as in and through the developmental stages of life. We discussed how our end aim for this great knowledge, centered around the Logos himself, is not to produce the “puffed up” man that I Corinthians warns us against, but ultimately, to cultivate our children and ourselves into glory speakers.

Doxology is the primary goal of our educational pursuits. The word is formed from a combination of two Greek words, doxa (glory or praise), and logos (speaking). Many of us know the doxology as a hymn of praise we sing in our churches and places of worship. The words of the song offer up praise to God and call upon creation and all mankind to speak of His glory. Are you familiar with its lilting words?

Praise God, from Whom all blessings flow;
Praise Him, all creatures here below;
Praise Him above, ye heavenly host;
Praise Father, Son, and Holy Ghost. Amen.

During the Parent Practicum, we asked ourselves the question, “What is the life song I desire my own words and actions to display and how do I inspire my children to a life that sings in praise to God?” Moreover, we discussed how we make use of the arts of learning, coupled with the various programs offered through Classical Conversations, in order to train up glory speakers. We looked at practical ways to make education not just classical but Christian through utilizing various liturgies that bring worship into our homes and right to our kitchen tables. We also analyzed the five canons of rhetoric—invention, arrangement, elocution, memory, and delivery—and made use of them not only in the structuring of a well-written essay or the delivery of a logically-developed argument, but also in the arrangement of our own lives and helping our students arrange their lives in a strategic way.

Finally, we ended our time together by reading a passage from Frances Hodgson Burnett’s magical tale, The Secret Garden. In this particular passage, taken from chapter twenty-six of the book, all of the children are gathered in the garden. Colin is experiencing a sort of awakening to the garden and the knowledge that he is truly well.  He is becoming more and more cognizant of the beauty that surrounds him, and with his realization, he feels so full he will burst in he doesn’t find a form of expression for his new discoveries. He is moving from mere knowledge that there is a garden to an understanding of the beauty and life he has found within its walls. Yet he is not quite sure how to give form and expression to his joy. Ben Weatherstaff, the crotchety old gardener, who is experiencing his own awakening, suggests that they sing the doxology. Colin has no idea what it is, but Dickon, who has grown up among God’s creation and acquired understanding of its greater meaning, is already rhetorical in his own life of glory speaking and he knows the doxology well. He leads them in singing it, and Colin feels satisfied that he has now expressed what he wanted to, stating that the doxology is, indeed, a good way to be thankful for what he calls the “Magic.”

After three days of teaching and learning at one of Classical Conversations’ many Parent Practicums, I, too, have felt an expression of the “Magic,” and the fire within to train my own children has been rekindled. As we parents continue to find the re-enchantment of our own educations and lives as glory speakers, may we pass this along to our dearest disciples, our children, and lead them in singing, as Dickon did for Colin, a life song of doxology that sings praise to the glory of God!

Excerpt from Chapter 26, The Secret Garden:

He had known it before in a way, he had hoped it and felt it and thought about it, but just at that minute something had rushed all through him—a sort of rapturous belief and realization and it had been so strong that he could not help calling out.

Ben Weatherstaff, who had been working near a rose-bush, glanced round at him.

“Tha’ might sing th’ Doxology,” he suggested in his dryest grunt. He had no opinion of the Doxology and he did not make the suggestion with any particular reverence.

But Colin was of an exploring mind and he knew nothing about the Doxology.

“What is that?” he inquired.

“They sing it i’ church,” he said. “Mother says she believes th’ skylarks sings it when they gets up i’ th’ mornin’.”

“If she says that, it must be a nice song,” Colin answered. “I’ve never been in a church myself. I was always too ill. Sing it, Dickon. I want to hear it.”

Dickon was quite simple and unaffected about it. He understood what Colin felt better than Colin did himself. He understood by a sort of instinct so natural that he did not know it was understanding. He pulled off his cap and looked round still smiling.

Colin took off his cap and the sun shone on and warmed his thick hair as he watched Dickon intently. Ben Weatherstaff scrambled up from his knees and bared his head too with a sort of puzzled half-resentful look on his old face as if he didn’t know exactly why he was doing this remarkable thing.

Dickon stood out among the trees and rose-bushes and began to sing in quite a simple matter-of-fact way and in a nice strong boy voice:

When he had finished, Ben Weatherstaff was standing quite still with his jaws set obstinately but with a disturbed look in his eyes fixed on Colin. Colin’s face was thoughtful and appreciative.

“It is a very nice song,” he said. “I like it. Perhaps it means just what I mean when I want to shout out that I am thankful to the Magic.” He stopped and thought in a puzzled way. “Perhaps they are both the same thing. How can we know the exact names of everything? Sing it again, Dickon. Let us try, Mary. I want to sing it, too. It’s my song. How does it begin? ‘Praise God from whom all blessings flow’?”

And they sang it again, and Mary and Colin lifted their voices as musically as they could and Dickon’s swelled quite loud and beautiful—and at the second line Ben Weatherstaff raspingly cleared his throat and at the third line he joined in with such vigor that it seemed almost savage and when the “Amen” came to an end Mary observed that the very same thing had happened to him which had happened when he found out that Colin was not a cripple—his chin was twitching and he was staring and winking and his leathery old cheeks were wet.

“I never seed no sense in th’ Doxology afore,” he said hoarsely, “but I may change my mind i’ time. I should say tha’d gone up five pound this week Mester Colin—five on ‘em!”