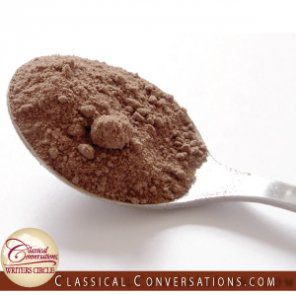 I recently had an aha moment about what it means to enter the dialectic stage.

I have three children ages thirteen, ten, and seven. My oldest son Caleb was down at the lake trying out a net he made while I wanted to do a science experiment with the younger two. We’ve done this experiment before, but I wanted to use it again to demonstrate a Bible verse. I told the kids what supplies we needed and they went about gathering them.

You may know the experiment. You simply sprinkle pepper over a bowl of water, dip a toothpick in dish soap, dab the toothpick lightly on the surface of the water, and watch the pepper escape to the sides of the bowl as the surface tension is disrupted.

My seven-year-old watched it for the first time with round eyes. “Wow!” he said, astounded. “How did it do that? You did something to it!” On the other hand, Mackenzie, my ten-year old, remembered this experiment and readily began offering information on why it happened.

After we talked for a minute, my son Zach wanted to do it again. So I gave him his own bowl, pepper, toothpicks, and soap. He went to work doing it again and again and again. I bet he repeated the experiment seven times. And he watched each time with the same awe and astonishment as he did the first time.

However, Mackenzie was not content to repeat the same procedure again and again like her brother in the poll parrot, grammar stage. Her first question was, “I wonder what would happen if I used cocoa powder instead of pepper?” So she headed to the pantry to get the cocoa powder and sprinkled a spoonful of it in her personal bowl. She added the soap to her finger and dipped it in. Nothing happened. The cocoa powder did not have the same reaction as the pepper did to the dish soap.

Then she wanted to try salt.

Then she mixed all of the ingredients up in her bowl and spilled half the contents onto the table. Excited with how well her experiments were going, she nearly fell down getting out of her chair to grab a towel to clean up her mess.

All the while, Zach was steadily popping the pepper on the water and watching it vanish to the side of the bowl over and over again. By this time, my brain hurt with all the activity and I decided we’d all learned enough about the experiment and how it parlayed into our verse.

As I thought about how that experiment went, the message from the practicum I had just attended kept ringing in my ears. Our speaker had emphasized how messy the dialectic stage of learning is. These children are putting together all the facts they know and trying to figure out why it happens as it does. My seven-year-old is still enamored with what happens, but my daughter was trying to figure out why and what if I did this….

Life is like a puzzle in so many ways, but for my children, I see the early focus on the arts of grammar as putting the straight edge pieces together. Then, once they can quickly assemble those, they can focus on the dialectic arts and begin sorting and trying to fit the middle pieces together around the straight edged ones. They try several options to see which ones fit and which ones don’t.

As my daughter did with our pepper experiment, dialectic kids may mix the ingredients together and shlosh half of it on the table. They’re bouncy and scatterbrained and ask a lot of questions. But I’m astounded at how much they’re learning through this messy process!

Classical Conversations has demonstrated to me that this part of learning is God-designed and normal. Now I can embrace and celebrate my daughter’s progress with the dialectic arts instead of being frustrated by it.