How to Ask Better Questions (and Why It Matters) 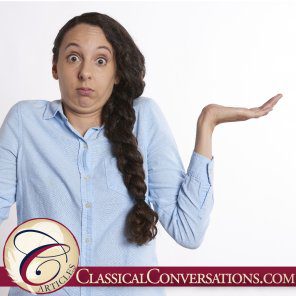 Why is it so difficult to ask good questions?

This year, I have been part of a team working on Leigh Bortins’ forthcoming book, The Question: Teaching Your Child the Essentials of Classical Education. Leigh’s book is a survival guide for homeschooling through junior high and high school. As you can probably guess from the title, she proposes that asking a lot of good questions is the key to surviving the teenage years while training your child to think and argue well.

Asking questions is not limited to teaching, however. People ask questions when they are curious, afraid, enthusiastic, frustrated, angry—in short, to cope with the whole range of human emotions. Asking questions is essential for succeeding at any job, building and maintaining relationships, and being a responsible citizen and community member.

Asking questions is as natural as learning to talk. Asking good questions requires greater effort, but it does not have to be a mysterious skill limited to philosophers and college professors. Everyone is capable of asking better questions with a little concentration and practice. To prove my point, I want to share with you two common mistakes that I make when asking questions, and ways I have learned to avoid them.

DAD: “Is it hard for you not to coach your daughter, or do you just enjoy watching her play?”

Scenario 2: A parent talking to a teenager about her black nail polish.

PARENT: “Do you just think it looks cool, or are you trying to make some kind of statement?”

The either/or format of the contingency plan turns a genuine question into a multiple-choice test. The dad in Scenario 1 is covering his bases. The second half of the question (“or do you just enjoy watching her play”) is his contingency plan. It shows that he knows the right answer. As a parent, he may legitimately struggle with his own competitive nature when it comes to his daughter’s activities. He might want to know that he is not alone, but he has now made the conversation about giving an expected answer, not a true one.

An either/or question can also imply that there are no other options beyond the two that have been offered. Scenario 2 is a good example. The fictional teenage girl might have an entirely different reason for wanting to wear black nail polish, but the mom in this scenario has not allowed her daughter to explain. What could have been an honest discussion has become an interrogation.

The contingency plan question is one of my greatest weaknesses. I want to leave myself an escape route should the other person prove judgmental. In the process, I put up barriers against genuine communication. To break this habit, watch for the sneaky word “or.” Sometimes, my questions end with a trailing “or” because I am still learning to chop my questions short and listen to the answer.

MOM: “Don’t you think you should do the biology lesson first?”

Scenario 2: A dad coaching his son through a math lesson.

DAD: “You would do the division first, then the subtraction, wouldn’t you?”

Each of these examples is a statement disguised as a question. To identify a personal coach question, all you have to do is look for the telltale negative question words: “shouldn’t” “don’t” “wouldn’t” or “can’t.”

Rather than telling her daughter why it is important to complete the biology lesson first, the mom in Scenario 1 is attempting to be subtle. The problem with this type of question is that by a certain age, children and adults learn to recognize the speaker’s intent. If the daughter in Scenario 1 has a biology tutoring session in a few hours, the mom may need to remind her daughter of this fact. A simple, “May I offer a suggestion?” clears the way to offer guidance where it is needed. Unless safety is at stake, the junior high years are a good chance for your child to practice accepting or rejecting advice and then dealing with the consequences.

The personal coach question often reveals anxiety. I often fell into this trap as a writing tutor. Time was limited, I felt rushed, and I lacked the patience to wait for my students to figure out an answer on their own. Likewise, in Scenario 2, the dad is trying to boost his son over a difficult step in a math problem. The problem with providing the answer is, eventually, the son will learn that if he waits long enough, his father will give him the answer, so he does not have to try.

Learning is a waiting game. If your child gets stuck, consider asking, “Where does the book explain how to do this kind of problem? Where might you find the answer?”, rather than giving him the information directly. If the personal coach question is a weak point for you, revert to questions that begin with “who,” “what,” “where,” “when,” or “how.” Remember: let your questions be questions and your statements be statements.

Imagine what might happen if we learned to separate the questions we ask from our self-worth. Our listening skills would improve. We would fling open the doors of conversation, not slam them shut. Our questions would be bigger, bolder, and more daring. Finally, our communication would become more pleasurable for everyone involved. When you ask questions without seeking to out-maneuver and jostle for position, you can relax and enjoy the conversations that matter most.