How to Campaign and Win a Roman Election—How the Romans Were Just Like Us! 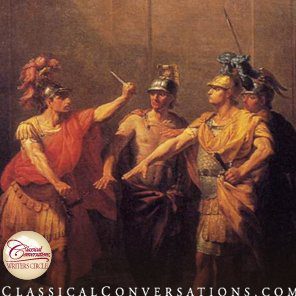 The Romans were just like us. They had problems with taxes, their economy, and unemployment. They also had trouble keeping their borders secure from other countries. They had issues with morality, abortion, and welfare. Augustus, in fact, gave benefits to men who were married and had children. (Augustus’ own family, however, did not buy into his reforms and ultimately they failed.)

Here is a quick rundown of some of the similarities:

Political “Parties”: The Romans had two political factions (much more fluid than factions and/or parties nowadays—a person could change from one to the other pretty easily). One faction was the Optimates (literally meaning, “the best men”). This group wanted to conserve the power of the Senate and limit the power of the popular assemblies as well as the tribunes. The other faction, Populares (literally meaning, “ones of the people”), favored lowering grain prices, increasing citizenship to those from the provinces, and limiting slavery.

Political Ladder: During the Republic, Romans worked their way up the political ladder, much like employment practices today. Each man who wanted to be in office would climb up the Cursus Honorum (“course of offices”). Each man who wanted to have a political office was expected first to be praetor (treasurer), then aedile(person in charge of public works and entertainment), then praetor (judge and administrator when consul is absent), and finally consul (the executive who initiated legislation, led military campaigns, and presided over the Senate). A man had to be a patrician and had to be at least thirty years old to start the Cursus Honorum. It was much harder for a novus homo (a new man, one whose family had never contained an officeholder) to be elected. In fact, Catiline was so mad that the novus homo Cicero was elected that he plotted for his death!

Campaigning: Roman campaigning involved giving speeches and having supporters post graffiti advertisements. Candidates were readily distinguished by their togas whitened with chalk (toga candidata—this is where we get our word candidate!) They gave speeches and held rallies (which could sometimes incite riots). All candidates had to have a lot of money, so sometimes they utilized bribery to acquire votes! (Men in public office did not get paid in anything but honor, so a public official had to be independently wealthy.)

Advertisements: Instead of being on Fox News or CNN, Roman advertisements—called dipinti—were painted on the walls and other surfaces. Pompeii, because it was “frozen” on the day it was covered by lava, has preserved many dipinti because the elections were a month before Vesuvius erupted. The dipinti show us much about their campaigns, such as endorsements or information about the candidates. One man, Lucretius Fronto, was running for aedile and had several election posters. One, for example, was “LUCRETIUS HIC FRONTO DIGNUS HONORE BONO EST” (“This Lucretius Fronto is worthy of a good honor/career”). He was also described in other places as decent and brave. Another man, Gaius Iulius Polybius, was desired to be an aedile because, “PANEM BONUM FERT” (“he makes/brings good bread”).  I wonder if he had any other qualifications! Another man running foraedile, Marcus Cerrinius Vatia, was not so lucky. Advertisements could not be outright slanderous, but they could be slight misrepresentations. For instance, someone from another faction (or his political team) painted over a sign so that it read, “Petty thieves for Vatia.”

Endorsements: Another factor that would ensure success in a campaign would be the support of a guild (i.e., a modern day union) for a candidate. The Romans had guilds for almost any trade imaginable: tanners, cobblers, carpenters, smiths, dyers, flute-blowers, and fishmongers. These tradesmen would have dipinti reflecting their support for the candidate as well as giving vocal support. Guilds became so political, that the Romans banned them during the later Republic.

Sometimes when students are studying the Romans, they feel as though the Romans are far removed from them in years. However, just as Solomon said, “There is nothing new under the sun.” The Romans had problems that were similar to the ones we have now and it is important to know their history so that we are not doomed to repeat it.

For information on Roman government and the Cursus Honorum: