If You Are Willing 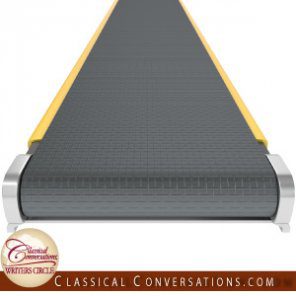 “If you are willing I will be there.” Thus the gracious, tender voice of the Holy Spirit came. It was May 2013 and I was at a homeschool convention. I went for one reason: to research math curricula. However, twenty-four hours later I found myself on the threshold of the most significant parenting decision I had ever made. That being, whether or not I should take my five-year-old daughter with Down syndrome out of public school to homeschool her.

Colette had been in kindergarten for eight months at that point. Almost since birth she had been traveling on what I call the Special Needs Conveyor Belt. That is, the carrying medium of the educational system for a special needs child.  As with any conveyor belt there is a drive pulley which provides the mode of force for the belt. On this conveyor belt the drive pulley is the established committee of experts on the care and development of special needs children. This committee decides what the child needs and when she needs it. At approximately four weeks old you get a visit from a physical therapist. This is the beginning the conveyor belt. At six months, speech therapy and occupational therapy are added so that by the time your child is two she is receiving too much therapy to continue with home providers. The belt moves her from the warmth and comfort of your home to an organized day program at a local preschool. Suddenly, you find yourself facing a committee of ten to fifteen strangers to both you and your child, all telling you what their individual goals are for your child. They are the experts so you mostly trust them. Eventually, your child outgrows preschool and the belt continues to move headlong into public school. The drive pulley, which is only capable of moving in one direction, affords you no options. There is no private school that has the resources needed for your child and therefore there is no apparent way off this belt.

After a series of divine appointments I left that homeschooling convention armed with a new hope that, regardless of what the experts were saying, I could take my little girl off of the conveyor belt and provide for her the environment that she needed in order to thrive. The Holy Spirit had told me that if I was willing He would be there. Just as Jesus bade Peter to come out of the boat he bade me to take Colette out of this system that was failing her.

I had already attempted one year of classical education with my older daughter. I believed in it with all my heart, but never imagined in my wildest dreams that such a rigorous education would be attainable for a child with significant cognitive delays. Imagine my surprise when God began to lead me in that direction. In fact, it was my research for Colette that led me to Classical Conversations. I visited a community in mid-October of 2013. At the end of three hours the little girl that had been spending the bulk of her day in a time-out chair in kindergarten was reciting Latin conjugations, could point to three different locations on the map and could tell me about the Age of Absolute Monarchs. Needless to say, we joined that community and I spent the remainder of the school year in awe of what Colette was accomplishing.

So why do I think Classical Conversations is suitable for any special needs child? Well, I barely know where to begin to answer that question, but for now all I will say is that Colette is no longer the school’s mascot for a superficial expression of inclusion, but she is, instead, a valued member of her class and a desired Jeopardy review partner.

To read the second article in this series, click here.