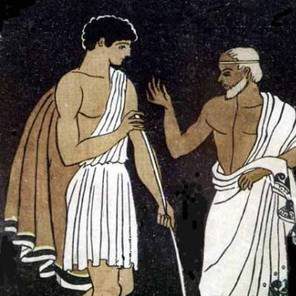 What is a mentor, anyway?  In Homer’s Odyssey, Mentor is a wise older friend of Odysseus who advises his son Telemachus.  Ten years after the Trojan War ends, Odysseus has still not found his way home to Ithaka.  The men of the island try to convince his wife, Penelope, to marry them so that they can assume Odysseus’ estate.  For years, they have invaded his home, eating his food and drinking his wine.  Finally, his son Telemachus has had enough.  He asks the ruling council to evict the suitors from his home.  Fearing repercussions, they rule in favor of the suitors.   Only Mentor and one other older man support Telemachus.  After the ruling, Pallas Athene disguises herself as Mentor and advises Telemachus to set sail and search for news of his father.  She assumes that Telemachus, being an intelligent and well-reared nobleman, will listen to his elder.  From this story, we derive our idea of a wise, older mentor counseling a younger person and leading them toward wisdom.

When I was newly married, I worked for a large corporation.  I was hired into a special training program which assigned experienced men and women in the company to train and mentor new workers.  When I was first homeschooling my children, experienced homeschool moms stepped in to fill this role in my life.  Mentoring continues to occur spontaneously in Classical Conversations communities around the country as more experienced mothers exhort and encourage younger mothers.  This summer, it occurred to me that our students also need mentors.

1.  Share Scripture with their mentee to encourage them in their studies,

2.  Pray for them and with them during the meeting and throughout the month, and

3.  Discuss struggles and successes in or outside of their studies.

Some of the older students enjoyed this so much that they have been meeting briefly with their mentees at lunch every week.  The girls at our community have organized a mentor/mentee fellowship outside of community so that the students can get to know each other even better.  I hope that our mentors will have a couple of years to guide these young students and to prepare them to become mentors themselves.  I pray that the older students are blessed through this leadership opportunity and that they grow into adulthood because they have been given adult responsibility.  I pray that the younger students are blessed because someone who has gone before them is now taking the time to show them the way.