My Summer with Percy Jackson 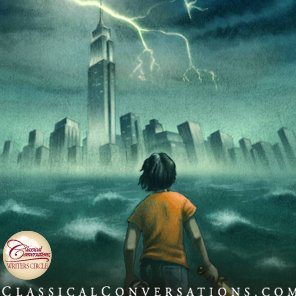 As part of my Latin background, I have studied lots of mythology. I have studied Greek mythology, Roman mythology, Norse mythology, and a bit of Egyptian mythology. I used to have my students in public school write modern-day myths; thus, they would use the same names and plots, but set the story in modern day and make it plausible. I was so excited when some of the Foundations’ students told me this was the premise of the Percy Jackson books! The idea that the Greek and Roman “little g” gods and monsters would be living in modern day America sounded so intriguing to me. I have read the series and now my eight-year-old daughter, Annie and I are listening to the audiobooks. Rick Riordan’s series has captured our imaginations and has provided much entertainment during car rides. It has also helped to keep the TV turned off!

Annie already had the pegs from Foundations concerning the Greek and Roman gods, but she is learning more every day. Here are some things we have gleaned from the Percy Jackson series:

1. Audiobooks written in first person point of view are more engrossing than third person. The narrator not only discusses the action, but also the thoughts and feelings behind the actions. Audiobooks are a bit more impersonal and less engaging, and the first person point of view makes them less so. The next ones to which we may listen are: The Story of the Treasure Seekers by E. Nesbit, Treasure Island by Robert Lewis Stevenson, Bud, Not Buddy and The Watsons Go to Birmingham by Christopher Paul Curtis, Island of the Blue Dolphins by Scott O’Dell, and The Best Christmas Pageant Ever by Barbara Robinson. The website http://www.audible.com/has great deals and some books from the public domain are read by volunteers on www.librivox.org. We use our library’s electronic catalogue to get many of our Percy Jackson books.

2. The Percy Jackson series has solidified some conventions of literature and epic for my daughter and has easily integrated subjects. We have reviewed the literary terms protagonist, antagonist, plot, imagery, characterization, flashback, and setting. We have discussed Riordan’s style and why his writing is so enjoyable to us. We have also integrated the terms from mythology used in English such as Hades, Arachnophobia (coming from the myth of Arachne, who turns into a spider, and Phobos, the god of fear), and Atlas. Finally, every book involves some sort of quest throughout the United States so we get to review American geography.

3. The fake “little g” gods of Percy Jackson provide a springboard to discussion concerning our God. Riordan does a wonderful job representing the “little g” gods in the way that the ancients portrayed them. They are always intervening and scheming, just like in The Iliad, The Odyssey, and The Aeneid. They are anthropomorphic (i.e., they act exactly like humans) and have human imperfections such as greed, lying, selfishness, and extreme hatred. They are bumbling, always fighting, and have no foresight into the future of people. They were created instead of being a creator. Our God, on the other hand, foreknew us (Romans 8:29) and has plans for us (Jeremiah 29:11). He is perfect and self-sacrificing: “If God be for us, who can be against us? He that spared not His own Son, but delivered Him up for us all, how shall He not with Him also freely give us all things?” (Romans 8:31-32, KJV). He cares for us so much that even the hairs on our heads are numbered (Matthew 10:30). Our God is omnipotent, omniscient, and omnipresent.