Pig Out on Good Food and Great Ideas 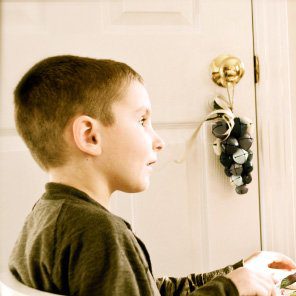 Imagine a banquet hall with a long table staggering under the weight of varied foods. Imagine a night filled with music, laughter, and stories. Imagine reasoned discourse about the issues of the day and about the nature of man.

Recently, I had the privilege of having such a feast with the Mandala Fellowship students. For one hour, we paused from our intense morning study of rhetoric. We gathered in small groups at round tables for pizza, salad, cookies, and discussion. In the morning, the students had submitted various topics for the discussion. At the start of the “Pig Feast,” Leigh Bortins randomly selected a topic and set a timer. We spent about fifteen minutes on each topic which gave time for the five or six of us at each table to share. During the course of the meal, we discussed current issues such as women in the military and philosophical ideas such as whether color or music is more important. At the fifteen-minute mark, the bell rang, and the moderator announced the new topic. The hour flew by. At the end of the feast, our minds were satiated as well as our bellies.

After our meal, I knew those five students much better than I had after spending the previous four days with them. I was amazed by these bright, eager, articulate souls. Once again, I was astounded by the simplicity of giving our children an excellent education. At the practicum this summer, I encouraged parents to remember that we need only four things to educate our children well—books, paper, pencil, and time. The time must be set aside for good conversations. These four are truly all we need to cultivate rich souls. After the Mandala Pig Feast, I would add a fifth thing—good food. In fact, I plan to have a few Pig Feasts this year with Challenge II students. In my community, we are going to start with lunch at our Challenge back-to-school meeting.

However, I decided to test the Pig Feast at home first. Sunday, after church, we decided to sit around the table for extended conversation. Recently, my husband and I have been burdened to be certain that our children are rooted in their faith. In an age which spurns traditions, American Christians are largely rootless. We decided to begin by leading our children through the catechism from my husband’s childhood. Our children are much younger than the Mandala students (fourteen, eleven, eight, and four), so we started by setting some ground rules about sitting up properly at the table and taking turns to speak.

On our first trial run, we spent almost two hours discussing the Ten Commandments. I was astounded. In those two hours, I learned much about my children and my husband. The older children described moral dilemmas they have faced and we all shared areas in which we struggle to keep God’s commands.

My younger children learned important lessons as well. They learned to sit still and listen to adult conversation. Too often, our society isolates children from adult conversation. At school, they are isolated all day with their peers. Evenings are too often spent driving children to activities. Too often, families gathered at restaurant tables for a meal are isolated by their smart phones and other devices. How can children mature into wise adulthood?

In his book, The Dumbest Generation: How the Digital Age Stupefies Young Americans and Jeopardizes our Future, Mark Bauerlein describes the link between the decline of education and the decline of dinner conversation.

What did exist, though, was a climate in which the voices of elders and the value of history and civics, books and ideas, exercised more pressure on the young. Teen social life had a limit, and in those other hours the forces of adulthood were felt, if resented . . . When I crossed the threshold and sat down to dinner, social life was over. I listened to my parents converse about money, work, the household, travel plans . . . Vietnam and Watergate. (xii)

He goes on to describe how home life was once a sanctuary, a refuge from life among peers. The bedroom gave students a space in which to read and think, unencumbered by social life with their peers. Now, he says, their bedrooms are command centers in which to stay eternally connected to teen life through social media. Yet, we are surprised by their immaturity.

We can offer a compelling contrast through the Pig Feast. We can offer our students good food and good conversation as we guide them toward adulthood and wisdom. We can build strong communities by feasting together.