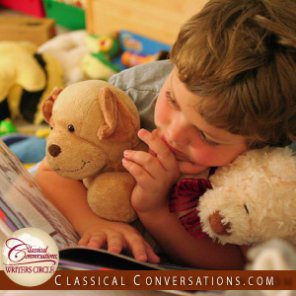 I sometimes think that preschoolers make the best philosophers. In order to study philosophy, you must possess three attributes: a ton of curiosity, openness to considering new or different answers, and a relentless ability to ask questions. Mortimer Adler writes about these tiny philosophers:

Children ask magnificent questions. ‘Why are people?’ ‘What makes the cat tick?’ ‘What’s the world’s first name?’ ‘Did God have a reason for creating the earth?’ Out of the mouths of babes comes, if not wisdom, at least the search for it. Philosophy, according to Aristotle, begins in wonder. It certainly begins in childhood, even if for most of us it stops there, too.                (270)

I have recently had a front-row seat to this philosophizing. For the last few months, my three-year-old daughter has peppered us with questions about the same issue. Here is a condensed record of the conversation:

“Who made the house?”

“Who made the dogs?”

It can be exhausting for those of us who are supposed to give all the answers, but it is an important work. She is sorting her knowledge of the world and filing it into two separate categories, “Man-Made Things” and “God-Made Things.” In the process, she is learning to make distinctions between living and non-living things and to understand their origins and their purposes.

As adults and older students, we must work hard to think about the world afresh. In Challenge III, our philosophy course begins by having the students consider the ancient maxim, “The unexamined life is not worth living.” In the course of contemplating this statement and deciding whether to agree or disagree, students must decide if most people really live unexamined lives. If so, does this include most Christians? Why should Christians want to live an examined life?

The study of philosophy asks students to consider some really fundamental questions. At first glance, some of these exercises seem ridiculous. For example, some students want to laugh at St. Augustine’s efforts in Confessions to pinpoint the exact moment that he became a sinner. As he wrestled with the repercussions of the Fall and the doctrine of original sin, he had to go all the way back to the beginning to consider whether or not he truly sinned as a newborn.

Another philosopher, Heraclitus, claimed that anything in existence is always changing. As proof, he declared that you can never step in the same river twice. The water has changed and the motion of the water has changed the soil and the banks. In addition, you as a person have grown older. So, how can we understand the existence of a world that is constantly in flux? Heraclitus theorized that there must be an orchestrator of the change, in other words, he reasoned his way toward the idea of a God who makes sense out of reality.

In another laughable attempt to explain reality, Plato once defined man as a “featherless biped,” a definition which worked fine until someone threw a plucked chicken at him (or so the legend goes). However, his attempt to define man is no laughing matter. We must know who we are in Christ. Students must ask who they are called to be in this life and in the life to come. They must ask good questions and make the same attempt to get wisdom.

My Challenge III students last year eventually defined man as: “a rational being composed of mind, body, and soul, which uses language to communicate.” This is a fairly impressive definition which leads to some really good questions. Outside of proofs from Scripture, how do we know we have a soul? What happens when the prevailing culture does not acknowledge that we have an immortal soul? How does this change the way they educate young people? How does this change the way we make government policies?

We also learned that one of Plato’s dialogues deals with the effects of technology on education. Yes, you heard me right. The participants in the dialogue worried that the written word would destroy the capacity for memory. This leads students to ask a host of questions about our lives today. Have the Internet and Social Media undermined our capacity to think? What are the differences between reading the news and watching the news? What is the difference between reading a book and watching a movie based on the book?

In fact, the notion of progress leads one to all sorts of other questions as well. Consider these questions from How to Read a Book: “(1) Is progress necessary, or is it contingent on other occurrences? (2) Will progress continue indefinitely, or will it eventually come to an end or ‘plateau out’? (3) Is there progress in human nature as well as in human institutions—in the human animal itself, or merely in the external conditions of human life?” (Adler, 328) These are all important questions to ponder as we begin to live the examined life.

If you have worried about how to study philosophy or to help your student with it, relax. Try to return to your childhood sense of wonder and ask a lot of questions.