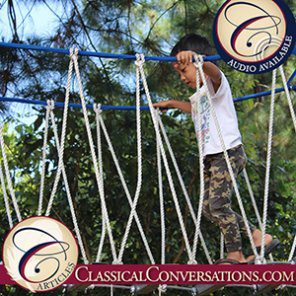 I have always valued imagination. As a child, I loved pretending that the root of the big tree in the backyard was a crocodile to be avoided in the “river” of dirt surrounding the tree. As a teen I spent summer days writing (bad) poetry instead of cleaning the garage. As a kindergarten teacher, I absolutely loved hearing the wild stories my students would concoct with the least provocation. As a young mom, I was thrilled to watch the ability to make-believe come alive in my dear girls.

But when someone recently asked me “How do you teach children to use their imaginations?” I was brought up short; I am not sure I had ever dissected the how before! So, I sat down to ponder the question. While I was thinking, I read an article my older daughter wrote about imagination, and growing up in our family that opened my eyes even more to how imagination might be cultivated at home. I am so glad Stephanie grew up with an imagination, and that she prizes it so highly! Here’s what I think helped:

First, we said yes as often as possible! Many activities that a small child dreams up are odd; they may be inconvenient, messy, “silly,” or simply past understanding to an adult. But, really, are those reasons to say no to a plan? We encouraged the girls to pretend and use their imaginations instead of depending on us or a television show to prompt their play; we could hardly complain if they wanted to play something we had never considered! We decided that as long as something wasn’t dangerous, unkind, or destructive, we would let them have free reign to explore the plans they devised. Many times I found myself drawn into a game or story they came up with, delighted to play along—although I would never have thought of it! We tried to say yes to playing in the water in the bathroom sink (something I was NEVER allowed to do as a small child!), even though it frequently made a mess. (It was not dangerous, unkind, or destructive in a long-term way.) We said yes to roaming the woods behind our house, and to pleas for a white sheet, or a roll of aluminum foil, or a brick. We said yes to unconventional costumes (a stalk of corn, a calculator, a boot) and birthday party themes unsupported by decorations for sale in any store. We said yes to the experiences and adventures they proposed as often as we could, even when they seemed inconvenient. Someone once told me that with little children, the days are long but the years are short—and we took that to heart.

Another habit we cultivated was thinking outside the box and asking questions. I loved asking “thought questions” of my littles! “What else does that look like?” “What else could that be/do/be used for?” With a little prompting, blocks became people, fabric scraps became super hero capes, matchboxes became lady bug coffins, pine straw became brooms. The girls learned to embrace the possibilities, not just the realities. We loved to tell stories, too. We could make a story out of almost anything, and we often did! I delight in telling my girls that they will be able to say to their children that they grew up when long trips were taken without DVDs, hand-held games, or phones to play on. Instead, we concocted stories; we told stories of when we were little, we made up fantastic tales of what we would do in outlandish situations, we even created stories about the people who lived in the houses we passed along our route. All the days of reading to our girls had given them a vast appreciation for stories and their power; they loved creating them as well as hearing them. Even at bedtime, we loved to stretch their imagination muscles! After reading books and saying prayers, the girls were put to bed with stories. For us, that meant that we gave each of them a couple of story starters, and they made up a story while they went to sleep. This, they declared, gave them good dreams!

A third practice that enhanced imagination at our house was the creation of a “craft closet.” Now, at first it was more of a drawer and then a shelf before it extended to a whole closet! This closet was a magical collection of stuff that could become other stuff. Squirreled away inside were scraps of fabric, lengths of string, leftover yarn, oddly-shaped packing materials, pieces of wood, old greeting cards, cardboard boxes, broken bits of jewelry, paints, markers, foam balls, stickers, modeling clay, springs, hoses from old vacuum cleaners, bits of old leather from my husband’s Boy Scout days, art tools from my high school projects, and all kinds of dress up clothes! As the girls needed a sword to play knights and dungeons, or a pegged leg to become a pirate, we had the stuff to call them into being. We had always modeled the old “use what you have to make what you need” adage for them; they did not see the lack of a prop as a stumbling block, but as a challenge! And, I think, they secretly loved hearing me say, “Yes, I think we have something…” to their queries for random raw materials. To this day, although my girls are now twenty-three and twenty-one, we still have a craft closet, and it continues to produce an astounding array of creation marvels.

As we look back on the days at home with our girls, we are humbled and elated that what we did (however blindly!) produced two lovely girls with creative spirits and an appreciation for the power of imagination. Imagination frees us to soar above the limitations of our physical world, and see and experience life in fresh new ways. What a great gift to give our children!