Studying Latin: the Benefit and the Beauty 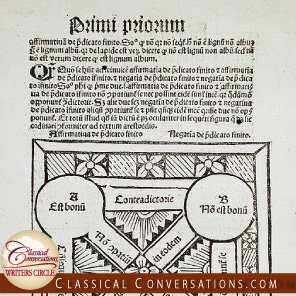 Latin is alive and well at the college level, and Challenge III and IV will prepare your student to join the conversation. In fact, the conversation could turn out to be a lot more familiar than expected.

A sophomore at an in-state liberal arts college, my daughter returned to her Latin roots this year after dabbling in Spanish for a couple of semesters. She had spent her final years of high school studying Spanish; she was part of the last Classical Conversations class to round out their grammar strand with Spanish instead of Latin. When she went to college, she decided to complete her foreign language requirement with Spanish, since it was the most recent language of study. However, after two semesters she tired of Spanish and decided to finish her degree requirement with Latin.

She felt some trepidation (as did her mom!), as she was jumping back into Latin at the literature level after a three-year hiatus. She has always been a “language lover,” though, and CC Latin was fairly comprehensive; she took the plunge. After the first class she texted me, asserting that the course would be “no problem,” since the material was not as demanding as she remembered Challenge II Latin to be! In fact, she related, the course was especially intriguing because they planned to spend the semester translating Cicero from the original Latin and discussing the ideas in his rhetoric.

I smiled to myself. Guess what the Challenge III and IV students do now, I asked? We focus on becoming rhetorical with our language skills, reading Caesar and Cicero and discussing the beauty of the language and the big ideas illuminated within the text. She was impressed to hear that our CC plan would prepare students so well for college-level Latin. In fact, she declared that her college course would mostly be review for those Challenge students who continued with Latin in the upper Challenges.

I was encouraged as a mom by her words and gratified as a CC tutor. The skills we are building in our students are the ones they will need to go forward into life-long learning. By focusing on the skills of grammar—memorizing vocabulary and learning the structure of language—we are equipping our students for success. The ability to translate literature from an original language enables our students to glean both the true ideas and the beauty of expression from the masters of old. We are indeed leading our students to become rhetorical with their knowledge.