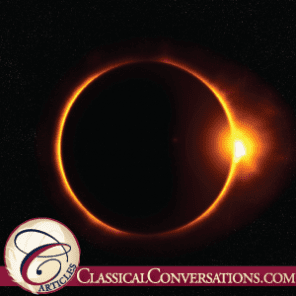 On May 28, 585 BC, the shadow of the moon fell upon Greece and Asia Minor, the sky went dark in the middle of the day, and a new era dawned upon Western civilization. Although total solar eclipses are not uncommon on the earth, the unique thing about this one, and the reason the darkness was actually a dawning of a new era, was that this eclipse came as no surprise. It had been predicted, but not a by an oracle or a prophet. This prediction was no act of the gods, rather it was quite the opposite. This total solar eclipse had been predicted by a man named Thales from the city of Miletus.

Thales, who lived over a century before Socrates, was quite renowned, even in his own day. His business travels took him to Egypt where he acquired the basics of geometry and astronomy. He is reputed to have developed new ways to navigate a ship at sea. He also helped an army general divert a river in order to build two small bridges when a single, large one could not be built. But it is his prediction of the total solar eclipse in 585 BC that has had the longest lasting impact on Western civilization and has become known as the “birth of Western philosophy,” as well as “the birth of Western science.” That is quite a feat for one man and his single prediction.

So why was this so important? Why did Thales’ prediction have such long lasting implications?

A new era dawned that day because a man had been able to predict that which previously had been inexplicable. By measuring the heavens and predicting the motions of the heavenly bodies, mankind no longer need attribute the awesome phenomenon of a total solar eclipse to the whim of an angry god. After all, Thales was no god. Neither was the disappearing and reappearing sun the result of a giant dragon in the sky eating the sun and spitting it back up again as some ancient cultures had supposed. Fear of the unknown was replaced that day by an understanding that a solar eclipse is caused by the constancy of the heavenly bodies in their paths. A total solar eclipse is a regular, predictable occurrence, and not the inexplicable, rash decision of the deities, nor the appetite of giant, heavenly monsters.

Bringing the gods down a notch raised man up a notch. Mankind not only learned that more could be known about the cosmos; he discovered that he could know more about himself. He began to realize that he could know more than ever thought possible. In the wake of this total solar eclipse, new Western man was born, and many of the old gods took one step closer to their graves.

If both Western science and Western philosophy were born that day, it could be said that Thales planted the seeds of Western education. Thales is grouped with a selection of inquirers known today as the pre-Socratic philosophers. The pre-Socratic philosophers went looking for the single thing that everything was made of. They did not find it, but they considered it and taught what they discovered to their students. Thales proposed that everything is made of water. One of his students proposed that all was fire. Another man named Democritus proposed that everything was made up of atoms that stuck together like Velcro—although he didn’t call it by that name. Democritus’ theory actually begins to come close to what we understand today.

Although none of them discovered the “single unifying thing,” their pursuit over the generations enabled their students to build on the foundations they were laying. Thales and the other pre-Socratics provide us with first recorded examples of what would one day become known as the quadrivium: the four ancient studies of mathematics, geometry, harmonics, and astronomy. Within a few hundred years after Thales, names like Pythagoras, Socrates, Plato, Aristotle, Euclid, Ptolemy, Archimedes, and many others were added to the list of mathematicians, scientists, and philosophers seeking to know the world as it really is.

Mankind was not left out of their studies, for as mentioned above, man’s understanding of “how he knows” is as important to the study of the world as “what he knows.” This is one reason why Thales’ single prediction resulted in the birth of both science and philosophy. There is no knowing without a knower, and the knower grows to understand himself better as he endeavors to more fully understand the world around him. Thus, Thales’ prediction could be categorized as the “Birth of Western Education.”

Thales, of course, was not the first to be educated, nor the first to educate, but as the moon’s shadow ran its course across the Mediterranean region over 2600 years ago a new era dawned—an era of inquiry that continues to this day. New questions began to be asked, new answers discovered, which led to further questions and further discoveries. Master taught apprentice, who in time became a master and taught a new apprentice. The quadrivium was developed, followed by the trivium, followed by century after century of teacher and student. And in our own day, as the same moon covers the same sun, casting its shadow on our country, we remember and are thankful to be following in Thales’ train—asking our own new questions, making our own new discoveries, and inviting our children to wonder at the wonderful world God has given us.

For further study of Thales and the quadrivium:

The Consequences of Ideas, R.C. Sproul

Mathematics for the Nonmathematician, Morris Kline