Thoughts on Ten Ways to Destroy the Imagination of Your Child 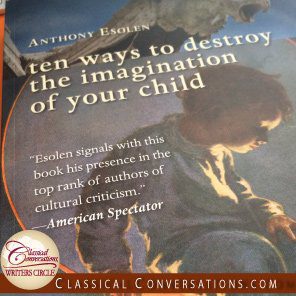 In Ten Ways to Destroy the Imagination of Your Child, Anthony Esolen writes an “indispensable guide to overcoming today’s treacherous trends in parenting and education—and the overwhelming banality of contemporary culture.” Esolen’s scope is broad, but my focus was narrow. I looked for how these cultural shifts, which Esolen strongly argues are negative, have impacted my home, my parenting, and my family. How have these effects shaped my parenting? Have I bought into a line of thinking and pattern of behavior that is not only mentally sterilizing, but also spiritually halting?

I want to raise intelligent, strong, and humble men who seek God first. I want a creative daughter full of beauty who loves God and loves people. I know to place my children into God’s hands, but am I blocking their view of Him through the works of my hands? Is how we are spending our time limiting their time with Him?

Some thoughts I will take with me:

“…a developed memory is a wondrous and terrible storehouse of things seen and heard and done. It can call up apparently unrelated things at once, molding them into a whole impression, or a new thought.

Without the library of the memory, the imagination simply does not have much to think about, or to play with.” (p.9)

“A fact may not be much, by itself, but it points toward what is true, and even the humblest truth may in time lead a mind to contemplate the beautiful and the good.” (p.26)

3. The playfulness of imagination is not possible without structure.

4. Drop the walls of playtime. Let them be outside, among friends (especially of the same gender), without parental involvement.

“…let children play with the elements of the world.” (p.76) In other words, let them be around “adults who know how to do things.” (p.76) “Young people (learn) by watching and listening to someone else, someone who had mastered the art.” (p.86)

“…when you starve your child of the folk tale, you not only cramp his imagination for the time being. You help to render vast realms of human art (not to mention human life) incomprehensible.” (p.98)

When the past is part of our present it prevents “inducing the kind of amnesia that has people always hankering after what is supposed to be new, without asking inconvenient questions about where the desirable thing has come from and where it will take us… For a man with a past may be free; but a man without a past, never.” (p.123)

“The past is like a secret room in an old house, filled with dust and cobwebs, but also rays of light cast upon ancient armor, and odd tools whose use we have forgotten, and books recalling the words and deeds of men and women who once walked the earth, and whose bones now rest in their graves. It is a chamber that strikes one with the sense of holiness, because we come into the presence of those who once were as we are, and who now are as we will be.” (p.136) If someone ever asks why we read the classics, I think this is a great answer!

“If we thought we knew what courage was, we hear of this holy priest, and we doubt again; our minds wander as if to a far galaxy, where beings dwell who seem like us but whose thoughts are like oceans to our puddles, stars to our fireflies.” (p.144)

10. Show them love, as that which seeks a truth beyond oneself, not simply an appetite to be filled.

11. Give them a longing for the nobility of manhood and womanhood.

12. Through quiet, teach them to hear.

In these ways, they will feel a call to the holy. “‘The beginning of philosophy is wonder,’ said Aristotle, and if that is so, then what is its end? Nothing other than the fulfillment of wonder: the contemplation of truth, the unchanging Good, the first Mover.”

The imagination is a portal to knowing God. What more could you want? And how could one dare to stifle it?

I find it funny that I have more than ten points considering the title of the book, but I bet if you read it for yourself, you will have more than ten things that you take with you, too! Maybe you did read it? If so, please share your thoughts below!