What Can Lost Tools of Writing Offer the IEW Writer? 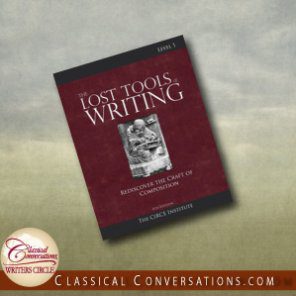 A dear friend of mine prefers Institute for Excellence in Writing’s Elegant Essay to CiRCE Institute’s Lost Tools of Writing (LTW) for high school students. “It teaches a mature essay, while LTW just gives a formula. It seems like a step backwards after Teaching Writing: Structure and Style,” she said. So, I thought for months about the differences between Institute for Excellence in Writing (IEW) and LTW, and I will tell you why I favor the latter.

When I first encountered IEW’s Teaching Writing: Structure and Style I was both pleased at its practical help for young writers and put off by its constraint. The formula bothered me. Every paragraph gets an –ly sentence opener. Clinch every paragraph with a reference to the topic sentence. Use the 3sss (three short simple sentences) in every essay. However, I quickly figured out what was going on: this regular practice built habits with certain stylistic devices which eventually became second nature for my children. The stiffness went away; the variety of sentence structure did not.

As they got older, however, I found we were stuck with a problem: my children had no confidence in discovering something unique to say. And this is where Lost Tools of Writing announced itself with modest fanfare. Now that I have worked with LTW for over three years I want to assure parents who are turning off the IEW trail how worthwhile the view is from LTW hill. I have three reasons for loving LTW: its teaching on Invention, its path to the thesis, and its training for making judgments.

First, LTW majors in the canon of invention. The five principles, or canons, of rhetoric are invention, arrangement, elocution, memoria, and delivery. Written communication is concerned with the first three. IEWs’ Teaching Writing: Structure and Style focuses on Arrangement (Structure) and Elocution (Style). In removing Invention from the mix by writing from models, it simplified writing for grammar-aged students. In contrast, LTW teaches Invention thoroughly by moving into the dialectic. The invention process is about asking questions. The writer thoroughly learns the Five Common Topics. Some fantastic things happen when the writer asks these questions: he discovers rich and unexpected things about his issue.

Second, students learn to find an issue of their own and form their own thesis. Once, as I explained how to create an issue with students in Challenge B, they became animated with excitement. When they realized they would be choosing their own issue, populating their own three column chart, and choosing the best argument, I could see them take ownership of their paper. Every thesis I read on the same book was unique.

A third distinction is the emphasis on wisdom. When LTW teaches students to create and defend a thesis, it is teaching them to judge virtue. Students list reasons to support each side long before they make a decision, and what comes of this is a greater understanding of the complexity of moral issues. Once they have sorted their ideas into groups, they have reasons to support both the affirmative of the issue and the negation. Which is the most compelling? Which is more virtuous? They exercise their growing powers of judgment.

It is true, IEW teaches excellent technique. Like a musician practicing scales and arpeggios, a student develops muscle, working every stylistic technique into his papers. Later, he can learn the beauty of restraint, understatement, and word economy. Technique is necessary, but all this robust technique will not disguise the absence of substance. Before writers employ technique in powerful persuasion, they have to have something potent to say. Elegant Essay’s technique could complement a high school writer’s experience with LTW.

Parents and students may feel dismay as writers graduate from IEW and go back to the extremely limited, repetitious essay of the early LTW assignments, but LTW deliberately guts the house so the master carpenter can get down to the structure. Then, bit by bit, the apprentice writer-thinker learns how to build a house with top notch craftsmanship. The IEW and the LTW classical essays differ enough that this is a valuable exercise. Not to worry: the student does not stay there long at all. Relish its initial simplicity and know this: the goal of these lessons is not the essay, but the process of Invention. It takes time to develop a way of thinking. Students may spend ten minutes writing that first essay, but a couple of hours in prewriting.

To summarize, Lost Tools of Writing trains writers in the canon of Invention, gets students personally invested in their communication, and gives them experience making judgments of virtue. I love Lost Tools for Writing for these reasons. But more than these, this classical writing program forms a habit of thoughtfulness and inquiry, as students learn to dig deeply into an issue rather than to make hasty judgments. They learn to consider both sides and hold off until they have asked probing questions. More than a writing program, it equips them for a lifetime of thinking, communicating, and judging with integrity.

“Is My Writing Going Backwards?” by Matt Bianco (in the appendix of the Challenge guides).

Video: The Nature of IEW and LTW
https://classicalconversations.com/essentials-learning-center