What Is Intelligent Design? 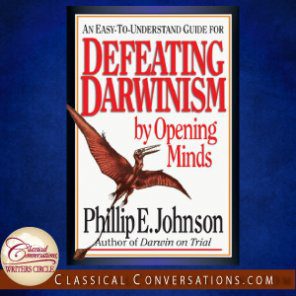 In Challenge B, Classical Conversations students investigate and discuss claims of the origins of life, centered on the book Defeating Darwinism by Opening Minds by Phillip Johnson. In the book, Johnson introduces students to a new theory called Intelligent Design. Unfortunately, most people have either never heard of Intelligent Design or they are misinformed about what it is.

The easiest way to understand this is to think about ourselves. Certainly, a very large portion of a human being is our physical body. And for a large part, our physical bodies are simply operating on the basis of chemistry and physics. But what happens when we create a work of art, say a painting? Is our art merely the result of the chemistry and physics of the brain or is something more required to fully explain the art that is produced? Is there something going on in the human person that is more than just the result of physics?

Many parts of the painting are fully understood using physics and chemistry—the way the colors mix together, the way that the brush applies the paint to the canvas, and even many of the actions of our muscles in moving the paintbrush. However, that still isn’t a full description. If someone were to ask how the painting came to be and I were to describe the chemistry of the person’s body and the physics of the paintbrush, I still wouldn’t have a complete explanation for the origin of the painting. There was the intention, the design, of the painter. The part of the causal picture that was missing from the physics/chemistry description is intelligent causation.

Intelligent Design is the study of the patterns produced by intelligent causes. In 1998, William Dembski published a book called The Design Inference which showed a method of pattern analysis which can be effectively used to identify patterns as having intentional causes. While Dembski’s method is too mathematically intense to review, a simple way of explaining it is to say that intelligent causes produce logical patterns that are independent of the underlying local physics. To put it another way, the painting is a logical pattern—it is based on meaning. The pattern in the painting is independent of the physics of the canvas and the paint.

Similarly, we can identify the same sort of thing with machines. Think of a lawnmower. The arrangement of parts of the lawnmower is a logical pattern, geared towards the purpose of cutting grass. This arrangement is independent of the general physics of metal—metal does not normally auto-arrange itself into a lawnmower. And the lawnmower itself may have been produced by a purely mechanical process through machines in the factory. However, we can tell because of the logical pattern of the mower that, somewhere in its causal history, an intelligent cause played a role.

Some of this may seem obvious, but science often progresses by taking normal, common sense notions and adding rigor. We know that if we drop something it will fall to the ground—that is common sense. However, by probing deeper and more rigorously, Newton invented the theory of gravity and classical physics. Likewise, intelligent design takes our common sense notions of intelligent causation and attempts to transform them into a science.

Now, all of this was not terribly controversial when it was first introduced. Dembski’s The Design Inference was released by Cambridge University Press as part of a series of books on decision theory. However, when you make a concept rigorous, it turns out that you can apply it much further than the original common sense notion. When Newton discovered gravity, it turned out that it not only explained the normal action of dropping dishes, but also the motion of the planets through space! Thus, when you apply a concept with rigor, it turns out that what was previously a local, common sense concept becomes much grander.

And so, with Intelligent Design, when you start looking for logical patterns that are independent of physics and chemistry, one area stands out like a sore thumb—the design that is inherent in living things. This is where Intelligent Design gets controversial. Intelligent Design claims that when a logical pattern is detected which is independent of the physics, one can infer that intelligent causes played a role at some point. This is where it comes into conflict with Darwinian evolutionary theory. One of the goals of Darwinian evolution is to describe a purely physical description of how life arose. However, such a goal presumes that only physical causes were in play. Intelligent Design undercuts the grand scheme by pointing out that the logical patterns (molecular machines, digital codes, organization of parts into systems, and so on) on display within living organisms indicate that, somewhere along the line, an intelligent cause played a role in its history.

This does not invalidate all of evolutionary biology, as there are certainly many changes in the history of life which are describable by physical causes. Once created, the operation of the lawnmower is also describable by physical causes. Darwinian evolution, on the other hand, is explicitly focused on providing an entirely materialistic explanation for life’s origin and development. Intelligent Design says this is not possible, because of the logical patterns present in life.

Now, Intelligent Design is not strictly restricted to design detection, but that is currently where most of the work and rigor of the subject have been focused. This is a new field and there is much work remaining to be done. Nonetheless, it is important for parents and students to understand what Intelligent Design is and why it causes so much fuss.