You Need a Budget 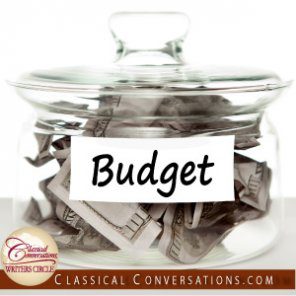 “There is no dignity quite so impressive,
and no independence quite so important,
as living within your means.”
– Calvin Coolidge

Date Night in my home falls on Wednesdays. This week the forester and I cleared a spot at the table and huddled romantically by laptop light to review our budget. After twenty-five years of marriage, this is an odd sight, for we have lived by the erratic income of the self-employed, spending when we have it and holding our breath when we do not. That evening I pulled up my program of You Need A Budget, and we tweaked the numbers. Both of us came away feeling a sense of peace, not because it was pretty, but because we had a clear picture of where we stood. Having lived without a budget for many years, we find You Need A Budget (YNAB) a pleasant change, even exciting. We can do this!

YNAB has a story behind it. It was created by a young father with an accounting degree, who came up with his own way of managing his family’s finances. Lots of his friends asked for a copy and a company was born. His method has four rules:

There is no need to gather data about past spending and you do not map out targets to hit. The idea is to begin where you are and move forward, making adjustments as you go. His team is ready to show you how. I can honestly say YNAB can help homeschool families in three ways: it launches a better lifestyle, fosters better communication, and offers better support.

First, YNAB leads to a better lifestyle—I can tell you that. Do we want to live the enduring values and model them for the next generation? One of those qualities is self-discipline. Up until now, I had the discipline of checking my balance online to see if I could get away with buying something! Our bank account leaked in small purchases. A couple of times a year I would forget about outstanding checks and have to pay bank fees as funds were moved from savings to cover them. We have carefully avoided credit card debt, but this year when we fell short at tax time we used the equity loan meant for college expenses. Yuck.

YNAB’s first rule, give every dollar a job, puts us in control of our income, and the third rule, roll with the punches, gives us permission to shift funds out of categories to cover unexpected expenses (and every month has them). YNAB’s second rule, save for a rainy day, teaches us to save for future known expenses by portioning some of today’s income for tomorrow. It stays in the account and builds a buffer, which we can borrow against in lean months. Interest on savings is practically nonexistent, so it might as well stay in the checking account—a new concept for us. The fourth rule, live off last month’s income, teaches us to work toward saving enough for an entire month’s income to sit in the account as a huge buffer. Now, it may take a few years to get to this point, but it seems a worthwhile goal, does it not?

Second, YNAB creates a platform for a couple to discuss family finances. Money is one of the top three stressors in a marriage. In our home, we tended to tiptoe around the issue and if the bills were being paid, we avoided mentioning it at all. Since my husband works long hours while I handle the children’s education, he makes it and I spend it. He has the responsibility of bringing home the bacon, while my task is to pay the bills. He sees it come in, and I see it go out. We have had a particular conversation so frequently, we could call it Predictable Exchange #35. It goes something like this: “Honey, we have some big bills coming up. I need to take a draw.” “I make such and so a year. The bookkeeper says we have drawn [a startling amount]. Where does it all go?” Well, with YNAB, now he knows! Both earner and bill payer make better decisions as we have accountability to one another for our choices. That is a good thing. We are pulling in harness together. It has removed resentment and finger pointing. (We were too polite to point, actually, but probably should have.)

YNAB suggests small his-and-hers discretionary spending categories, which allows each to make small purchases through the month without having to justify every penny. I like that. It is like saving a few calories in a diet budget to spend on a couple of chocolate truffles one evening. There really is a delightful side of budgeting, as a couple comes to know what they ultimately value, and then plans to make it happen. Shall we save for a spectacular family vacation? Provide frequent hospitality? Support missions work?

YNAB is the backbone of a more disciplined lifestyle, and it creates a solid platform for discussion in our marriage. A third benefit of YNAB is its robust support system. YNAB offers free webinars, live and recorded, which are professional and friendly. On the website you can find lively forums where every kind of story has been heard and the counsel is both encouraging and honest. By email we receive tips and entertaining blogs. (This is no small feature; the whole enterprise has this joie de vivre—exuberant enjoyment of life—about it.) And to top it all off, they are friendly toward tithing and do not expect the budget to be balanced by cutting contributions.

The community of You Need A Budget makes a pretty strong case that everyone does, in fact, need to budget his money. YNAB offers homeschool families a new path to take, draws husbands and wives together in fruitful conversation, and teaches them how to manage household finances through its robust support system. The benefits go far beyond bean counting, as we die to self and become more self-disciplined. There is strength in this. “He that is slow to anger is better than the mighty; and he that ruleth his spirit than he that taketh a city” (Proverbs 16:32, KJV). Can we live such transcendent values in an age of self-indulgence? Yes, through Christ who strengthens us. After all, He made us stewards of His gifts, both spiritual and material, and He can do fantastic things through us if we are faithful in the little.

You Need a Budget’s free trial helped me figure out this would work for us. The cost is $60, but ask your friends if they have a link for a 10% coupon, which YNAB apparently sends to purchasers to help spread the word.