Christian, Know Thyself: Why It Is Important to Study Philosophy 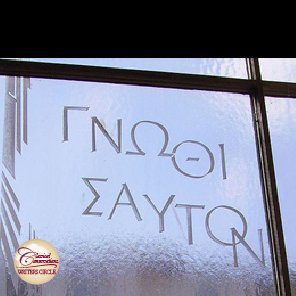 γνῶθι σαυτόν: “gnothi sauton” or “know yourself” in ancient Greek.

See to it that no one takes you captive through hollow and deceptive philosophy, which depends on human tradition and the basic principles of this world rather than on Christ (Col 2:8, NIV).

Socrates, one of the most famous of the ancient Greek philosophers, said that “the life which is unexamined is not worth living” (see Plato’s Apology1). In my Challenge III program this fall, the students and I have been pondering this Socratic adage closely as we read through The Consequences of Ideas,2 by Christian apologist R. C. Sproul. On the first day of seminars, we began discussing what Socrates’ claim might mean, whether or not we believe it to be accurate, and what importance it has for Christians—if any, considering it was put forward by a pagan philosopher.

One conclusion we have reached is to affirm the connection between what we believe and what we do; that is, we have acknowledged that human actions are based upon what humans believe has true value; another way to put this is to say that we value and therefore act upon what we accept as true, and we are not always clearly aware of what we accept as true. While we might claim to believe one thing, our actions actually demonstrate—as in “reveal” or “show”—what we truly believe. The “proof is in the pudding” so to speak, or as another old saying goes, “actions speak more loudly than words.” Scripturally these truisms are borne out in many places. Here are just two examples:

My students and I have therefore concluded that it is important for all men, and especially for Christians, to examine themselves in order to have a clear understanding of not only what they believe, but whether what they believe is true or whether it is—perhaps even unbeknownst to them—false. What we believe, even if we are largely unconscious of it, undoubtedly has ramifications in what we do, and that which is true will produce action which is good and beautiful while that which is false will produce action which is evil and ugly.

Many beliefs are based upon underlying assumptions; these are ideas that are often accepted as true without consideration of the evidence of their truth. These underlying assumptions in part make up a person’s basic comprehension of the world—to use a currently popular term, we may call this “worldview” (“a translation of the German word Weltenschauung, which means a way of looking at the world.”3). A person may therefore be a professing Christian who in large part behaves biblically, but if that person also adopts some underlying assumptions of the prevailing western worldview, secular humanism—say, for example, that faith and reason are irreconcilably at odds with one another and not only cannot, but should not, inform one another—then  he has fallen prey to a false philosophy; such a belief in the absolute separation of faith and reason is not biblical (consider Psalm 19 and Romans 1:19-20, and for further reading see Total Truth: Liberating Christianity from Its Cultural Captivity, Chapter 3-“Keeping Religion In Its Place” 4). This belief will be revealed in the actions of this person’s life. Given that the assumption is not biblical, those actions will at the very least be confusing to that individual in his Christian walk; at the worst, they will be damaging to him and those around him and will be—perhaps most destructive of all— a poor witness for Christ.

It is important to remember that because Christians live in the world, and are not meant to be isolated from it but are intended to “salt” it (see Matthew 5:13-16), we are exposed to the underlying assumptions of the many false philosophies which surround—and sometimes even assault—us every day; we are bombarded by them through our media, virtually (yes, pun intended!) without ceasing. They abound in our workplaces, in our schools, in our entertainments…they are unremittingly everywhere.

As a result of these seminar discussions, the recent focus of our Challenge III conversations has centered on the idea that as Christians we must take care not to be deceived by all the false philosophies which target us from every side. One of my Challenge III students used the analogy of spiders to describe such false philosophies, saying that we must guard against becoming caught in their sticky webs, which are hard to extricate ourselves from and can ultimately be deadly.

For my part, I remember the first time I began to deeply ponder this idea, after watching Focus on the Family’s series, The Truth Project.4 In it, I think Del Tackett makes an argument that goes something like this:

Jesus came to set prisoners free (see Isaiah 61:1 and Luke 4:18), and the prisoners are held captive by sin.

Being a prisoner to sin is the result of being deceived by false ideas or philosophies—the greatest example (and precedent) of this is Eve’s deception by Satan in the Garden of Eden (see Genesis 3).

This can seem nebulous and ephemeral, but note that its ramifications are profoundly practical: In comprehending the philosophical assumptions of a worldview, one can protect against being seduced into unbiblical action that would be the consequence of—knowingly or unknowingly—adopting the underlying assumptions of that worldview. Again, this can sometimes be manifested benignly, but in the worst case scenario it produces a seared conscience (see 1Timothy 4:2).

The blatant fact is that—no matter how often our culture sends us the message that such “highfalutin” learning is useless, suitable only for intellectuals who are cut off from reality as they ponder and worry over irrelevant ideas —philosophies are by no means purely cerebral, pragmatically meaningless musings that have no bearing on our world or on our lives. Indeed not. Philosophies  have had potent influences on every aspect of our civilization, and these influences seep down into the most practical matters that involve truth, goodness, and beauty—and their antitheses: falsehood, evil, and ugliness—in every action we take as flesh and blood. We  need only remember the devastating effects that Marx’s philosophy of “dialectical materialism” has had worldwide, through its incarnations in communism and socialism, to realize that philosophy is not at all simply an “academic” exercise (Marx himself  was highly indebted to the influential philosopher, Hegel, for the latter’s articulation of  the dialectic evolution of history).

Some might ask: “Is there not some risk to Christians in grappling with false philosophies?” The answer is that yes, there is risk, just as there is always risk in being in the world as soldiers of Christ. But here is the rub: there is greater risk in being ignorant of those philosophies, which is like sending a soldier out to battle with no knowledge of the terrain in which he must fight or of the tactics of his enemy. We are called to be warriors girded with the armor of God (Ephesians 6:13-17), to be wise as serpents (Matthew 10:16), and to be armed with strength of mind in knowledge of the enemy (Colossians 2:8, 2 Corinthians 11:14-15, Ephesians 6:11-12, 2 Corinthians 10:5, Romans 12:2, Mark 12:30). To neglect the knowledge of the enemy is to fail in grasping the cunning of the serpent and the lies of the father of deceit.

The crux of the matter, however, is this: How does one tell a “false” philosophy from a “true” one, and how does one know whether one has “bought into” the “underlying assumptions” of a false philosophy? The obvious answer is that one must be familiar with the truth (with a capital ‘T”) as it is revealed through the Scriptures, but also with the various dominant and influential philosophies of our civilization. One must have studied them, and come to some kind of clear understanding of them, in order to detect them—to have the discernment necessary to perceive them—whenever they rear their heads. This is hardly a mere academic exercise, a foray into a realm of information that quite frankly, many people consider useless. On the contrary: It is of critical importance to every Christian, with implication for every part of his life, including his witness for Christ.

In his book, Beauty for Truth’s Sake, Stratford Caldecott points out that “we are living in an era shaped by philosophical battles that most of us are unaware ever took place.”5 It is important that Christians not only be aware that this battle has taken—and is still taking— place, but that they are called by Scripture to be familiar with the participants in the battle. They must be able to name and describe all the many “isms,” both figurative and literal, that like spirits of dark intent infiltrate and haunt all aspects of the world in which Christians are called to bring light.

To “know thyself,” another famous dictum sometimes attributed to Socrates and connected with the idea of living the examined life, is thus to understand what one believes and to have evaluated those beliefs carefully in order to have established them as Scripturally sound. And, one cannot compare a false belief with a true one unless one can identify the one as “false” and the other as “true.” One cannot make such identifications without having perceived and studied both. Such discernment then produces a sound biblical worldview, which in turn produces biblical behavior; that in turn becomes a powerful biblical witness to a fallen world, a world awash in false philosophies and helplessly held captive in sin.

Studying philosophy thus helps us fulfill the Great Commission by producing authentic Christian witness through behavior that exhibits a sound biblical worldview, and through that behavior it salts the world. Christian, know thyself.

1 “[T]he life which is unexamined is not worth living” See: http://classics.mit.edu/Plato/apology.html 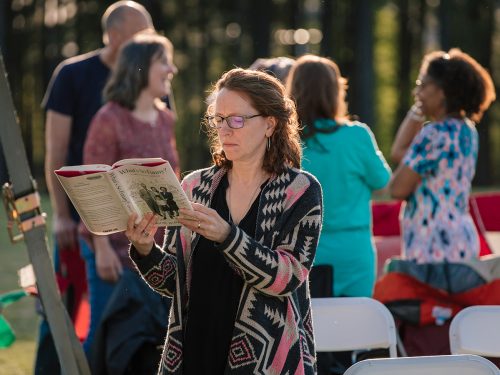 Maybe you’ve been in a similar situation. Whether it’s at a thrift shop, an estate... 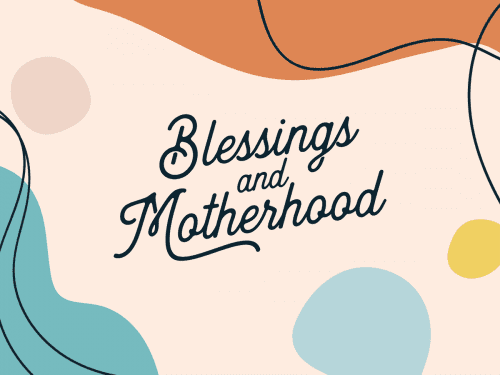 Say hello to the newest podcast from Classical Conversations®, Blessings and Motherhood, now available to... 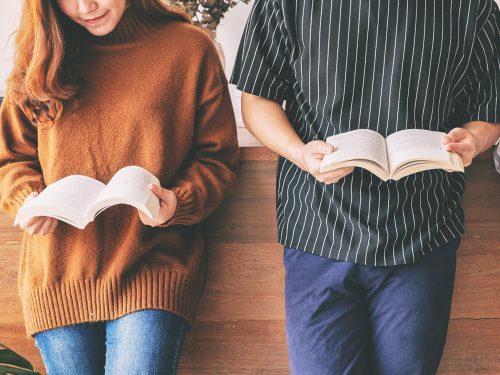 Host a Poetry Café in Your Local Community!

Classical Conversations® Challenge III is the year when students really delve into the study of...