Essentials to Challenge I Latin 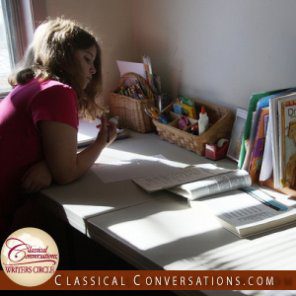 One of the things that first attracted me to the classical model of learning was its emphasis on language skills as a tool to develop thinking skills, because words are the building blocks of ideas. Those who have a mastery of words have a greater ability to master ideas.

Understanding the structure of language is a key component of the language mastery which is the foundation of sound thinking skills. Remember Helen Keller, before she understood language? Because of her frustration with her inability to communicate, she behaved like an animal. Once Anne Sullivan finally got her to understand that everything has a name, it became apparent that she was brilliant. In the end, she could read five languages and one of them was Latin.

In order to lay the proper foundation for students to attain this important mastery of language, Classical Conversations has established the Essentials Program. This two-hour afternoon tutorial is designed to prepare fourth through sixth graders for the Challenge program. In it, they learn that each word in a sentence has a job to do, and they learn what those jobs are. Students analyze English sentences by asking a series of questions. They learn that no matter the level of complexity of a sentence, they can understand the function of every word in it by looking for the same basic elements: subject, verb, direct object and predicate nominative, and modifiers. Once a student has mastered this information, he is prepared to read, understand, and write complex sentences. The same skills apply to Latin.

No matter what the subject is, the most effective teaching methods begin with what the student knows, and lead him to the new information. Students who know English well have the foundation from which to begin to learn Latin. As they examine Latin sentences, they have already formed the habit of asking basic questions as a means of understanding English sentences. These same questions are the keys to understanding sentences in Latin. Furthermore, they are not perplexed by the idea that a word, such as a noun, can have a number of functions. They have already seen a noun as a subject, as a direct object, a predicate nominative, the object of a preposition, and so on. Thus, memorizing noun endings becomes more a matter of what to memorize, and less about why it makes sense. The same is true of other parts of speech. Students who know English grammar are comfortable with the difference between what kind of word it is (noun, verb, adjective, preposition, and so on) and how it functions in the sentence (subject, adverbial phrase, linking verb, and so forth). Students who are not familiar with the parts of speech and the parts of a sentence are at a disadvantage, as they are grappling with two levels of grammar (as in, basic background information extant in any field of study) at once—the grammar of English, as well as the grammar of Latin.

As a result of this systematic approach to the study of English, Essentials students learn to think of language, not as a nebulous cloud which somehow conveys meaning, but as a structured entity with specific identifiable parts which can be decoded when the meaning is not readily apparent. Each word in the sentence has a role. It is there to do a job. This disciplined approach to the decoding of language which is learned in Essentials is an important basis of preparation to study Latin. However, all this decoding of language is useless unless it increases our awareness of the fact that we are created “imago Dei,” in the image of God. As students understand the rudiments of language, they are also better prepared to “know God and to make Him known.”