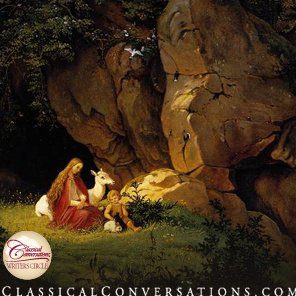 Our world isn’t clear regarding the differences between fables, myths, and fairy tales. We tend to lump them together into anthologies based on the characteristics they have in common: all of them contain fantastical elements, magic, talking animals, and so on, and all of them seem to focus on questions of morality. There’s nothing wrong with anthologizing them together, but I’ve come to realize that we’re missing something when we’re taught to think of all three forms as “fantasy,” rather than understanding them as distinct genres. Since I’ve been writing about heroes and mythology lately, this topic seemed to warrant some attention.

At a Classical Conversations MultiMedia team meeting with Andrew Kern of the CiRCE Institute, I began to become aware of the differences between fables, myths, and fairy tales. Andrew had us read this fable:

This is a condensed version, but the original wasn’t much longer. As you can see, fables are short. It doesn’t take a fable long to make its point: a chicken flatters a fox into saying something prideful, then gets away when the fox opens his mouth; a boy who makes a joke out of the community’s good faith doesn’t receive their help when the wolf shows up; a clever animal escapes a predator by promising to return with a bigger animal for him to eat. Fables use character types that are easily grasped and plots as simple as a single action and its consequence. It could be said that fables aren’t so much a story as they are an expanded proverb. This is because fables depict moral truth.

As a depiction of moral truth, there is a sense in which fables defy interpretation or even synopsis. When Andrew asked if we could interpret the donkey story, Matt Bianco astutely repeated the entire story back to him. The interpretation is the story, because a fable is already irreducibly complex in its metaphorical presentation of moral truth. A possible synopsis of the above might be: bickering will leave you both destitute. However, the metaphor of the kid, donkey, and driver contains a wider range of meaning and is much more relatable.

If fables are moral metaphors, then myths are psychological metaphors. Consider the story of Gilgamesh, whose aggression and libido are a torment to his subjects until a peer can be found who possesses strength like Gilgamesh’s. Together they set about destroying monsters and defending the kingdom. The psychological message is clear: masculinity requires the outlets of camaraderie and conquest; if it is internalized, it becomes destructive.

Consider the story of Achilles, who sought to win glory by using the methods by which his world claimed glory could be attained, but discovered that he had been lied to. When he saw that such glory could be taken away by another man, Achilles turned and sought, instead, an imperishable glory. Fulfillment does not come from the changeable accolades of men, but from some transcendent standard.

Today we tend to read myths as if their purpose is to present a moral role model—we are rightly disappointed. Myths do not contain role models; they often do not even contain admirable men. Rather, they present men whose lives are metaphors for the workings of the mind.

Fairy tales are a related “species” and are probably the hardest of the three story forms to define. While scholars quibble about exact definitions, it is commonly agreed that: fairy tales are close to the German tradition of märchen (“wonder tales”), fairy tales are a subcategory within the larger class of folk tales, fairy tale characters conform to recognizable archetypes (the youngest son, the princess, the trickster, the idiot, the wolf, the witch, the plucky youth, and so on), and while fairy tales don’t require the presence of fairies per se, they contain magical or fantastical elements. “Animal tales” (e.g., The Three Little Pigs, Chicken Little) are typically included in the category of fairy tales because their animal protagonists are really just stand-ins for human characteristics and archetypes.

If fables are moral metaphors and myths are psychological metaphors, then what is the value of fairy tales? Is Jack, of Jack and the Beanstalk, a good guy? He kills the giant and is made rich by stealing the giant’s magic hen. There is no moral lesson here, as in a fable, nor does Jack represent any distinct facet of the psyche. I will argue that fairy tales are social metaphors.

In The Three Little Pigs, we see one industrious brother and two slothful brothers make their preparations against a common predator. The social lesson in a fairy tale is as clear as the moral lesson in a fable: hunger and disaster lurk just outside and industry makes one safe, while sloth invites destruction. In Chicken Little, an excitable populace becomes the dupe of the alarmist title character, who is in turn the dupe of a scheming force of evil—the fox. The social or political message is clear: the society that believes everything it is told becomes as stupid as its most stupid member, and will fall prey (literally or metaphorically) to whoever can talk the loudest.

As with any summary, the above interpretation is, of course, poorer in meaning than the actual story; if I wanted to tell you what the story really means, I would read the whole thing to you, like Matt Bianco’s retelling of Andrew’s fable. I have provided my simplistic summary only to demonstrate that the meaning conveyed in Chicken Little, and in other fairy tales, is social—a metaphor that shows us how societies operate.

Thus the fabulist is concerned with moral metaphor, the mythographer with psychological metaphor, and the fairy tale writer with social metaphor. When we fail to understand the goal of each kind of story, we demand something from them which they cannot give, and we reduce the value they can have for us.