Lily Stepped Out of the Boat 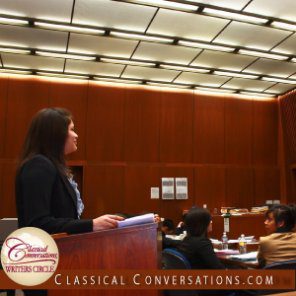 And ne’er shall April 10th go by, from this day to the ending of the world, but we in it shall be remember’d. We few, we happy few, we band of homeschoolers. For he (or she) who competes in Mock Trial this day shall be my brother (or sister), be they ne’er so vile (or rather fearful), this day shall gentle their condition. And other students in other tutorials will think themselves accursed they were not here. And hold their rhetorical skills cheap, whiles any speaks, who tried a case with us on April 10th.

Okay, maybe that is a little over the top, but needless to say, yesterday was an amazing day. Of all the rotations we make on God’s good earth as she hurdles around the sun, only a handful actually qualify for the statement, “I’ll never forget this day,” but yesterday was one of those days. Yesterday, my thirteen-year-old daughter, Lily, participated in a Classical Conversations Mock Trial held in the Justice A. A. Birch Building in Nashville, Tennessee, where the honorable Judge William E. Higgins presided. But it was not the ornate building, the friendly judge, the winning of the verdict, or the ice cream party afterwards that made the day unforgettable. It was that Lily had something hard to do and she did it.

Lily had been preparing for weeks. She and her cocounselor, Carolyn, had been writing, emailing, making conference calls, rewriting and re-emailing, in order to get everything right. It was Lily’s job to write and present the opening and closing statements in the defense of a woman accused of first degree murder. But for all the effort that was put into the preparation, there was not an ounce of her that had any desire to stand in front of a judge, her peers, or a courtroom full of people to utter a single word of all that she had written. 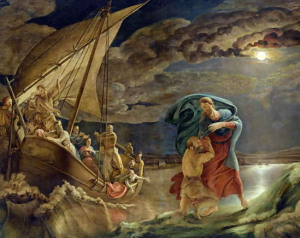 After the prosecution had made their opening remarks, Lily rose to make her approach to the podium in the center of the room. Like Peter, she stepped out of the boat. She walked to the podium, placed her notes upon it, picked them back up, and then returned to her chair with her face in her hands, unable to speak the first word. Like Peter, she saw the wind and the waves and began to sink. Maria Pardue, a real-life defense attorney, who had served as an advisor for the students, took Lily by the hand and walked her back up to the podium. Ms. Pardue proceeded to give Lily’s opening statement on her behalf, but could not make heads or tails of Lily’s keyword outline. Lily, who had the statement memorized, corrected Ms. Pardue a couple of times, and then proceeded to make her opening statement herself. Like Peter, she had a friend to take her by the hand and lift her up. With that helper, Lily found her voice and delivered as fine an opening statement as has ever been made. (I am not biased or anything.) When the time came for her closing statement she rose and approached the podium with no help and dutifully, as well as eloquently, completed her closing remarks.

Lily did a hard thing. She and I had long talks over the past few weeks knowing that this day was coming. We talked about how easy things require little or no faith. We talked about teamwork, completing assignments, obedience to parents, as well as faith, fear, and friendship. But mostly we talked about doing hard things and how Jesus had hard things to do. There was once this cup—a cup He would have liked to have seen pass Him by, but it did not. So, He drank from it. For the joy set before Him, He drank it dry, and as we are conformed to His image, we have been called to not shy away from hard things either.

If Lily had been unable to give her opening statement and never returned to the podium to make it, she would have failed. Technically speaking, she would have had a job to do and would not have been able to complete it, so, she would have failed. But in the midst of that failure there would have been no shame. Just because we take on something bigger than we are, does not mean that we will always get it right the first time, or the second, or the third. There is no shame in attempting big things for Christ’s Kingdom, discovering that you are not as big as you thought you were, then learning that God is way bigger than you thought He was. Our heavenly Father is as awe-inspiring as He is long-suffering, granting us opportunity after opportunity to attempt, to fail, and to try again, because as Christians our failures are always temporary. His Kingdom will come on earth, as it is in heaven, and the gates of hell will not be able to withstand His people’s attacks, no matter how many of them appear to fail for the moment.

Yesterday, however, Lily did not fail. Like Peter, she stepped out of the boat. Like Peter, she saw the wind and the waves and began to sink. And like Peter she had a friend take her by the hand and raise her back up. She walked into the courtroom, she made her statements, and she won the verdict. She did it all by taking a small step toward a podium, thereby making a giant leap away from the crippling fear of failure.